The defender made his Champions League debut in his side’s 2-1 win over Inter Milan on Tuesday and two days later, Mundo Deportivo explained the Saints and other suitors ‘go after’ the 19-year-old.

It was also explained the Frenchman’s valuation has increased after shining against Antonio Conte’s side, but the report didn’t provide any figures.

According to the newspaper, the La Liga winners will not allow the centre-back to leave for anything less than €10m and as part of the deal, they want to include a repurchase option. 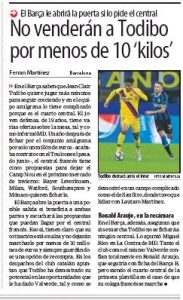 Mundo further states any potential transfer will only take place if Todibo asks to leave Ernesto Valverde’s side in the winter market.

Todibo is the fourth-choice centre-back at Barca, behind Gerard Piqué, Clément Lenglet and Samuel Umtiti. Therefore, it will be complicated for him to get regular opportunities.