West Bromwich Albion are languishing in the relegation zone due to their failure to score regularly this season.

The Baggies have 19 goals from 24 matches, despite investing on five attacking players in the previous two windows.

Karlan Grant was the only striker to arrive at the club last summer. Prior to his arrival, the Premier League side wanted to sign Club Brugge’s Emmanuel Dennis on a loan deal.

The Nigeria international is now on loan at 1. FC Köln and Saturday’s edition of Het Nieuwsblad has an interview with the frontman.

The newspaper states Dennis ‘had the Premier League in his head’, and there was an opportunity for him to join the Baggies last summer.

It’s explained the 23-year-old ‘had a deal with West Brom’, but a loan deal ‘jumped off on details’. The player doesn’t think his failed move to the English club is a ‘tragedy’ because of their status as Premier League newcomers.

Sam Allardyce’s side were used as an example to ask Dennis if the likes of West Brom and Köln are a step down to Club Brugge because the latter have played in European competition this season. Dennis dismissed this suggestion.

There’s no mention of the ‘details’ which stopped the player from moving to England. This question was answered by Dennis himself during another interview with Het Nieuwsblad last October.

“At one point I was about to leave, but I did not get a work permit. It was a loan with maybe an option,” he said.

“I wanted to prove myself in England. Maybe you play five matches at West Brom and another club will come and get you. 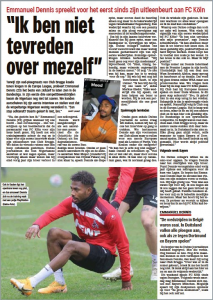 “Of course. I always aim higher. But the teams that wanted me kept me waiting. They said it was the crisis. I wanted something new so I said, Okay, I’ll wait. I was not stressed to leave.