As has been reported a number of times, AS Roma want Diogo Dalot, and Manchester United are happy to let him go for a certain amount of money.

The Red Devils want that cash straight away, or, if they don’t, want to ensure they do get it with a loan and a mandatory purchase clause.

The amounts requested by Manchester United have been a bit too high for the Serie A side, who are desperate to give Dalot to José Mourinho to bolster the right-back role at the club.

Tiago Pinto has hit a bit of a wall, but hasn’t given up entirely, as Corriere dello Sport continue to push the story, reassuring everyone that ‘work is ongoing’ for this deal to get done.

What helps Roma a bit is the fact Dalot has a ‘great desire to leave’ Manchester United in order to reunite with his ‘mentor’ Mourinho.

However, the Red Devils ‘need to be convinced to negotiate the loan with a mandatory clause linked to a number of appearances’.

The amounts are also revealed, with €1.5m going straight into the Old Trafford bank accounts, with the latter clause being €13-15m, meaning a maximum of €16.5m being made from the deal.

That’s what Roma are seemingly prepared to pay, but is that what 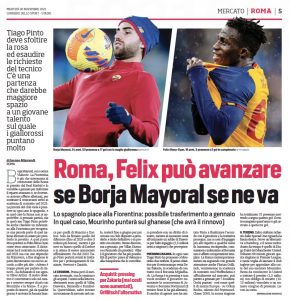 Manchester United are prepared to accept? It doesn’t seem like it right now.

Also, it’s worth noting that everything could change with the arrival of Ralf Rangnick, so perhaps the Premier League side are simply waiting to see what the German wants to do first before accepting offers left, right and centre for players.