When Gareth Bale returned to Tottenham in the summer, it was almost guaranteed the whole affair would be a drama in one way or another.

Whether he shone back in London or struggled, the Welshman was always going to be the centre of attention this season.

For much of the campaign, it’s appeared like it would be a case of the latter, with injury issues, a lack of form and the absence of faith from Jose Mourinho, meaning Bale had barely featured.

The last few weeks, though, there has been a resurgence. Bale has quickly, and quite unexpectedly, shown flashes of the old brilliance and the player that Tottenham were hoping was in there somewhere.

Suddenly, he’s the key man once again and leading a late surge up the table and return to form for Mourinho and co.

ABC look at the situation today and detail how Bale has gone ‘from hell to heaven’ under the Portuguese manager’s leadership this year.

They explain how, with four goals and three assists in his last four games, Bale has ‘hit peak form’ at the key part of the season for Tottenham.

It hadn’t looked like this would ever happen, though, with his second spell at Tottenham having ‘more twists and turns than a Christopher Nolan film’.

It’s stated that his return to form has helped remind us that Bale still something left to give, and such has been the extent of the turnaround, ‘even Mourinho acknowledged his mistake’ in leaving him out earlier this year. 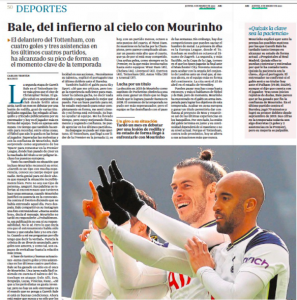 The Welshman is now his ‘unexpected weapon’ as Spurs look to secure a top-four place and silverware, in either the Europa League or Carabao Cup final.

Finishing in Europe and winning a trophy would ‘give confidence’ to Mourinho’s project and allow him to ‘make up’ for recent disappointing spells elsewhere.

For Bale, meanwhile, it is all about maintaining his current level. His ‘continuity’ at Tottenham is dependant on that, with them unlikely to pursue a permanent deal based on his performances earlier this year.

At this moment in time, though, they are ‘clinging to his performances more than ever’, and that could see both him and Mourinho staying much longer if those performances lead to a strong end to the season.