It’s been repeatedly reported that Barcelona’s Frenkie de Jong is the priority target for Manchester United this summer.

Saturday’s edition of Sport explains the midfielder, ‘although little by little’, is ‘getting closer’ to United. However, there is no agreement between the two clubs so far.

It’s said the difference between the Catalan club’s request and the best offer from Erik ten Hag’s side is currently €15m. There’s no mention of the figures requested by Barca, and proposed by Manchester United.

Despite the difference, the feeling is the Netherlands international will leave the Camp Nou, even though his desire had been to continue. 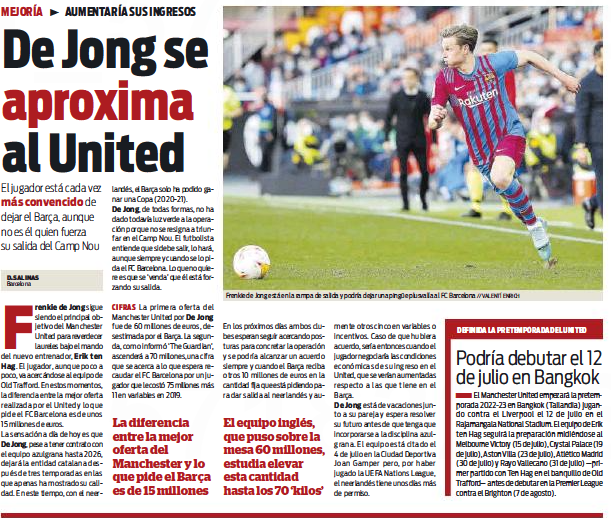 The former Ajax man hasn’t given the green light for the transfer. However, he understands that if he were to move, then it is because Barcelona asked him to leave, and not because he forced an exit.

In the ‘coming days’, Manchester United and Barca hope to continue to approach a position to finalise the deal for the Dutchman, as long as Barca receive an extra €10m in fixed fee and €5m in add-ons.

Should the clubs find an agreement, then it will be between Ten Hag’s side and De Jong to agree personal terms to carry out the transfer.

The former Ajax man is currently on vacation and Sport explain he ‘hopes to resolve his future’ before he has to join Barcelona’s pre-season preparation on July 4th.

Another report from Sport explains the player doesn’t want to be the ‘villain’ in this case and will not ‘torpedo a transfer’, if the deal is beneficial for Xavi Hernández’s side.