Home Premier League Chelsea Player ‘far from what was expected’ – A small version of his...
SHARE

Expectations at Real Madrid are so high that the club is disappointed more often than not.

That’s the case with their purchase of Eden Hazard from Chelsea, reports Marca in their Sunday edition.

Madrid had been considering signing the Belgium international for years, and he’d made it clear he was up for the challenge.

Club president Florentino Perez was keen, yet not keen enough to pay the super fees Chelsea were asking. Hazard kept his dream and when Zinedine Zidane returned for his second stint as manager at the Bernabeu, Perez gave in and let him make the signing.

Marca say so far Hazard has been ‘far from what was expected’ and he’s a smaller version of the superstar he was at Chelsea. 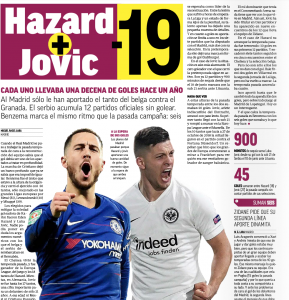 Niggling injury issues haven’t helped, yet he won’t get much sympathy for that from the Madrid media or the club’s demanding fans.

Luka Jovic is genuinely having a poor start to his Real Madrid, and Marca say that with both attacking signings not living up to what was expected, it leaves Los Blancos without the goals they need.