On Saturday, we covered reports from Italy about Atalanta’s desire to keep Amad Diallo until the end of the current season.

The Serie A club’s manager Gian Piero Gasperini admitted that would be down to Manchester United, given they agreed a deal to sign the 18-year-old in the last window.

Saturday’s reports didn’t sound very confident on behalf of Atalanta, with it being pointed out Ole Gunnar Solskjaer spoke publicly a few days ago about his desire to have the youngster with his squad soon.

On Sunday, Gazzetta dello Sport take a look at things and insist the Italian club haven’t given up on the chance.

It’s explained that Diallo is expected to fly to England tomorrow to join up with Manchester United, but that’s not the end of it.

Atalanta will have to see if they can find a 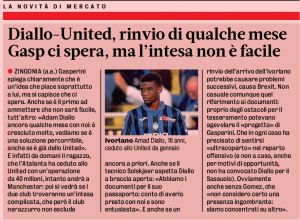 ‘complicated agreement’ with the Red Devils to get the player back until the end of the campaign.

Gazzetta state such an agreement won’t be easy, and it’s very much a long shot for the Bergamo club right now.