Julio Tavares scored 21 goals in the last two seasons in Ligue 1 for Dijon and has started the new season by scoring three goals in the first two matches.

Saturday’s edition of French newspaper L’Equipe has a story which talks about how the 29-year-old has improved over the years. They suggest he has ‘become a fox’ inside the box after scoring thrice this campaign.

His form for his current club has seen him attract interest from several clubs and he is ‘especially coveted’ by Championship sides Aston Villa and Norwich City. The Cape Verdean international at the Stade Gaston Gérard runs down in three years.

The Championship transfer window closed at the end of this month, meaning both Aston Villa and Norwich have an opportunity to secure Tavares’ services.

Dijon president Olivier Delcourt has stressed that only an “exceptional” offer will convince him to sanction the sale of his attacker. 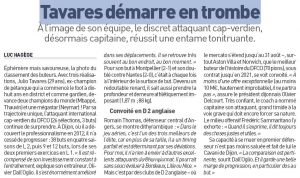 “Unless an exceptional offer (at least €10m, which is highly unlikely), he will not go away,” Delcourt said.

Villa or Norwich would have to take the player on loan, and then pay a transfer fee in January.