Home Premier League Chelsea Player has ‘enormous interest of Chelsea’ – Blues must get ahead of...
SHARE

On June 21st, ABC Sevilla reported Chelsea are in regular contact with Jules Koundé’s agent, with the last contact between the parties being made on Monday.

Barcelona have also been showing interest in the defender, but their La Liga counterparts are of the belief that only the Blues can pay €60-65m for him.

The 23-year-old, along with Bayern Munich’s Robert Lewandowski and Manchester City’s Bernardo Silva, is on the front page of today’s Mundo Deportivo, as the trio are the main targets for Barca this summer.

Within the report, it’s said the centre-back has received the ‘enormous interest of Chelsea’.

Julen Lopetegui’s side have informed the former Bordeaux man that they will let him leave if there is an offer of €60m, which is €30m less than his release clause.

Although Thomas Tuchel’s side have tempted the France international, a year after they failed signing him, he has ‘parked the interest’ of Chelsea due to Barca.

While Sevilla want a €60m fee, Barcelona president Joan Laporta believes Koundé will leave the club for a lower price.

Monchi, the Andalusian club’s sporting director, is no longer counting on the Frenchman for the new season. He is now waiting for a firm written offer from Barcelona. 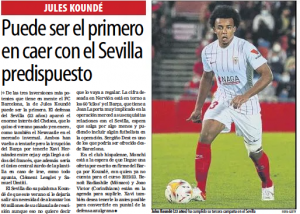 It will be interesting to see what the player plans to do if Chelsea table a €60m bid for him.

Either way, with Koundé said to be favouring a move to the Camp Nou, Tuchel and the west London club must convince him if they want to get ahead of Barcelona to secure his services.