Over the weekend, reports coming out of England explained Leeds United are showing interest in Gent’s Milad Mohammadi.

Monday’s edition of Het Nieuwsblad states the Whites are now joined by Steven Gerrard’s Rangers in the chase for the left-back.

The 26-year-old arrived at the Jupiler Pro League club as a free agent last summer, after running down his contract with Russian side FC Akhmat Grozny.

He has made 24 appearances in all competitions for Gent, and has a goal and two assists to his name.

The Iran international is on the radar of the Premier League newcomers, and it’s claimed the fullback now ‘enjoys interest’ from Leeds and Rangers.

Mohammadi has two more years left on his contract with Gent, and according to the report, both Marcelo Bielsa’s side and Rangers should not be put off by the player’s ‘hefty price’. 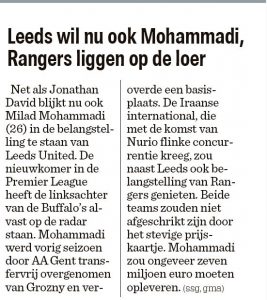 Het Nieuwsblad are of the belief the defender’s sale should help the Belgian side earn around €7m.

For now, the newspaper only explains Leeds and Rangers’ interest in Mohammadi, and they don’t stress which club is ahead in the race to secure his signature.