Home Europe Player edging towards signing for Southampton, unless Leeds or Newcastle scupper it
SHARE

Southampton are edging close to a deal for Stade Brestois left-back Romain Perraud after his impressive season in Ligue 1.

That’s according to L’Equipe, who say the defender is ‘believed to be closer’ to Southampton than Newcastle and Leeds, who are also keen.

Perraud was one of the stars of the show for Stade Brestois last season, racking up seven assists and three goals in Ligue 1.

Those numbers are very good, to say the least, and it has earned him attention in the Premier League from Southampton, Leeds and Newcastle.

They are all keen on a deal, which will exceed €10m, but it Southampton who are leading the race for his signature. 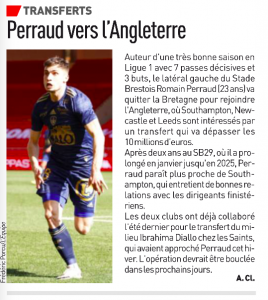 L’Equipe state that he is ‘believed to be closer’ to the Saints rather than the competition as they have a ‘good relationship’ with Stade Brest.

What that means isn’t made clear, but Southampton did sign Ibrahima Diallo from Brest last year, so presumably, it has something to do with that.

Either way, they are edging towards a deal, although there is still time for Leeds or Newcastle to scupper their plans.