It seems Tottenham Hotspur will be losing the race for Argentine defender Juan Foyth if they don’t raise their offer soon.

As reported by newspaper El Dia today, Estudiantes are only waiting for an official offer from Paris Saint Germain to make the youngster’s sale official.

The local press had great confidence that Tottenham would be landing the player, but their offer of €7m plus €3m in bonuses wasn’t enough to convince the La Plata club. 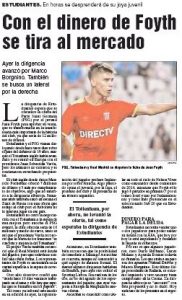 The player’s representatives would prefer a move to England, and Foyth himself would like the league, and to have Argentine manager Mauricio Pochettino by his side. That’s all in Tottenham’s favour.

Real Madrid have also showed interest, but are still to make an offer, and Zenit even showed a will to pay a good price, but the player ruled out a move to Russia.

Estudiantes were expecting Tottenham to raise their bid, but nothing has happened yet. Time is running out, and in case Spurs take too long, PSG’s offer is good enough for the Argentine side to sell.