The attacker has been linked with a move to the North London side in recent months, and this week Spurs’ interest in the player was also backed up by Kosovo Football Federation president Agim Ademi.

Despite reported interest from Serie A clubs, Fanatik claim Fenerbahce’s star man is a big fan of the Premier League and he’s looking at teaming up with Mourinho at Tottenham.

Muriqi believes Mourinho could lead him to the next level, just like he did with Diego Milito and Didier Drogba, and therefore he’s eager to work with the Portuguese manager. 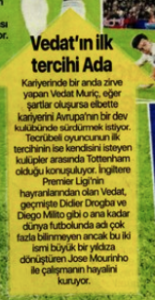 The 26 year old has been heavily linked with a move away from the Super Lig club, with the likes of Napoli and Lazio also said to be interested in him.

He’s scored 15 goals for Fener in all competitions this season, and is under contract at the club until June 2023.