With Emiliano Martinez being one of the main heroes in Argentina’s squad which won the Copa America title this month, the big attention he’s been getting from the local media continues.

Newspaper Olé features this week a cover story with a four-page interview with the player, and that was obviously enough for him to talk about his whole career, which is clearly at its peak now.

Since Martinez spent ten years being an Arsenal player, there were obviously a few mentions to the Gunners, especially about his exit, since he claims the motive for his departure was the dream of being the number one at the national team.

He explains that manager Lionel Scaloni started calling him up when he had few chances at Arsenal, and playing for Argentina is what changed his career.

“He really gave me life. He started calling me when I was the substitute at Arsenal. I played the Europa League and I was having minutes at the national team. I’ve been in the Lionel process for two years,” Martinez told Olé. 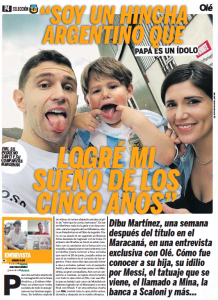 Then in the last summer, it was time to take a bigger step by joining Aston Villa and finally leaving Arsenal and the Emirates.

That’s when he became a starter for Argentina, and it seems it was all worth it.

“Each one sets his objectives. I don’t give up if I don’t have goals, I don’t have enthusiasm. I fight for something. That is why, like every year that I was on loan, I left Arsenal, which cut a five-year contract, to go to play at Villa for the dream of the national team. It’s not that it was by chance that I had a good year, lie: I’ve been doing well for five years.”

“I haven’t been injured in seven years. I could say ‘I don’t play and eat anything …’. No. I do yoga, pilates, personal physio, personal psychologist three times a week. But someone says ‘oh no, he had a good year’ as many journalists said. ‘God does not know him, he played 20 games only.’ I’ve been growing for seven years at this time. That’s why we played seven games and won a Copa América. It wasn’t luck…”