Home Europe Player ‘in demand’ with Fulham ‘above all’ – Club want ‘a few...
SHARE

With Juventus seemingly closing in on the signing of Andrea Cambiaso at left-back, the departure of Luca Pellegrini looks more and more likely.

It’s no secret the defender has been in talks with Premier League clubs, with Fulham most recently reported as being in the lead in the race with West Ham.

This idea continues on Thursday, as Gazzetta dello Sport bring the latest on the matter, explaining to their readers that the player ‘is in demand’ in the Premier League, ‘above all’ by the Cottagers.

Having secured a return to the Premier League, Fulham are keen to improve their squad to avoid another immediate return to the Championship. 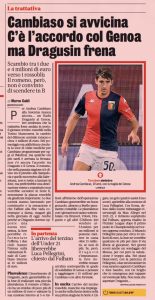 Pellegrini reportedly weighs at around €10m on the Juventus books, and it’s pointed out the Serie A side would like ‘a few million more to give the green light to the player’.

That means Fulham would be looking at a fee of around €12m+, you would think, to get any transfer over the line.

This falls in line with a previous report that Marco Silva’s side were ready to invest €12m in the defender.