Rafael Benitez allowed Matz Sels to join Anderlecht on a season-long loan deal last summer and the goalkeeper wants to sign for the Purple & White club on a permanent deal.

The 26-year-old has already been offered a five-year deal by the Jupiler Pro League club. Het Nieuwsblad reported Anderlecht had “negotiated” with the Magpies for the Belgium international on Monday.

The two clubs were hoping the deal could be completed before this week as Sels wanted to start training with Anderlecht from next week. There has now been a new twist in the ongoing transfer saga.

Belgium outlet Het Laatste Nieuws says Anderlecht offered €2m to Newcastle for Sels. The Premier League club laughed at their initial offer, which is fair enough, and provided a second chance to make an approach to sign the former Gent man. 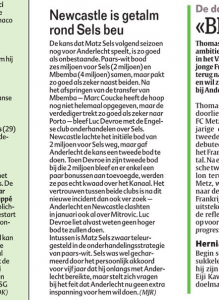 In their second offer, Anderlecht made a bid of €2m plus bonuses. This did not go down well with the Tyneside club.

Sels is “deeply disappointed” with the Belgian club’s negotiating tactics and is now questioning if Anderlecht wants to make “extra effort” to him this summer.