Home Premier League Arsenal ‘The official position is one of anger’ – Arsenal player’s ‘attitude’ an...
SHARE

For months, the north London club were trying to lower the midfielder’s fee, while the La Liga side insisted Arsenal pay his buyout clause.

Mikel Arteta’s side did that on Monday, but it came as a surprise for Los Rojiblancos as they had ‘no knowledge’ of the Emirates club’s intentions.

La Liga informed Atlético the Premier League side had paid the Ghana international’s clause at 11:28pm [Madrid time] on the final day of the transfer window.

Mundo Deportivo states Thomas’ ‘attitude’ has bothered the Madrid club. He was at the training ground yesterday to say goodbye to his old teammates and Atlético’s coaching staff.

The newspaper states: ‘The official position is one of anger, but no one avoids that, at these levels, in high spheres, the intentions of Arsenal were known, with which they have also negotiated Torreira’s loan in recent weeks.’

That would suggest that all this talk of the Spaniards being caught totally by surprise isn’t the actual truth.

Atlético tried to negotiate a new deal with Partey for several months, which would have included a pay rise and also increased his release clause. However, these talks weren’t fruitful. 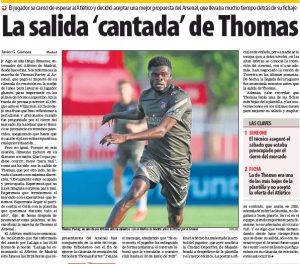 Thomas was one of the key players for Diego Simeone, but according to the report, he wasn’t compensated appropriately. He demanded a pay rise for a long time and that didn’t happen.

In the end, Mundo states that Thomas ‘got tired of waiting’ for Atlético’s improved deal and ‘decided to accept’ a better proposal from Arsenal.