With Miguel Layun looking for a way out of Porto in the January market, Everton are still named in the list of candidates to take him.

As reported by A Bola today, the Mexican international is afraid that sitting on the bench for too long will damage his chances to have a spot at the World Cup squad later this year.

That’s why despite having a few chances lately, the player is convinced he should go somewhere where he can be a regular starter, and that’s why he’s decided to leave. 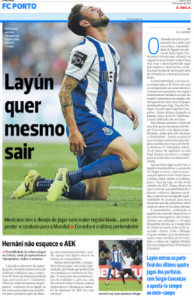 A Bola doesn’t seem to have their own list of clubs who want Layun. But they say they that just ‘taking a look at the foreign media’ is enough to see that there are several sides who want him.

Besides Everton, Deportivo La Coruña, Alavés, Celta, Malaga, Cagliari and Fenerbahce are all said to be interested as well.

Funny thing is that it was the very same A Bola who originally linked Layun to Everton, which makes their story quite confusing. Why wouldn’t their credit that info to themselves?

With so many clubs on the list, let’s see if this chase is true or if someone is just spreading rumours around when looking for a move.