Tottenham Hotspur have been repeatedly linked with Barcelona owned player Philippe Coutinho, who is currently on loan at Bayern Munich.

The La Liga winners have slapped a €100m valuation on the playmaker, but they are also open to the idea of letting him go out on loan for €10m.

On June 3rd, we carried a report from Mundo Deportivo, who explained that José Mourinho is ‘not in favour’ of Spurs paying an ‘exorbitant’ price for the Brazil international.

Journalist Xavier Bosch has partly denied those claims in today’s edition of the same newspaper.

He makes it clear the north London club are ‘not crazy’ to pay €100m for the former Liverpool star, but they would ‘aspire’ to sign the South American on a loan deal.

The title states ‘Coutinho dazzled Tottenham’ whenever he has faced them in recent times. 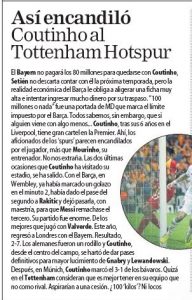 In the last two seasons, Coutinho has faced Tottenham on four occasions; twice with Barcelona during the 2018/19 campaign and two times with Bayern this term. He has scored two goals and registered two assists in these four matches.

A transfer would only be considered if it is a loan deal.

The claims are continually contradicting, yet it could be a scenario of Tottenham having some interest, and trying to play that down to get the best deal possible.