Tottenham Hotspur’s negotiations to sign Sevilla’s Bryan Gil ‘would be quite advanced’, according to Mundo Deportivo.

The 20-year-old spent the last 18 months on loan at CD Leganés and SD Eibar, and his form for the latter has caught attention from eslewhere,

His current deal runs down in 2023, which has a €50m release clause. Sevilla wanted to extend his contract and improve his release clause to €150m, but are met with his refusal.

This has convinced the Spanish club side to make him available in the market and have received Julen Lopetegui’s approval. 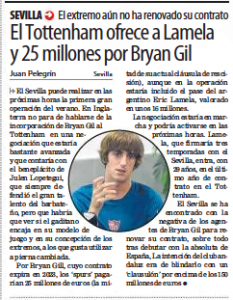 Spurs would pay €25m [half of his release clause], but the La Liga will receive money plus Erik Lamela in exchange.

The Argentine, who holds a Spanish passport, has entered his final year of contract at the north London club.

Mundo state negotiations are underway and the operation involving the two players ‘could be activated in the next few hours’.

Over at AS, they state Sevilla and Nuno Espírito Santo’s side ‘tried to finish’ the negotiation yesterday for a deal that will see Gil move to Tottenham and Sevilla get €25m [excluding bonuses] and Lamela.

Gil is currently in Japan, representing Spain at the Olympic Games. It was initially planned

for him to train under Lopetegui’s orders after the tournament, but ‘everything will change if the transfer ends up taking place’.

AS state: ‘The operation would ease Sevilla’s salary limit to allow them to reinforce the team, without needing to urgently transfer Jules Koundé’.

With this operation, Spurs will get a young talent in the form of Gil and also allow them to offload Lamela, who has a year left on his contract.

Sevilla, on the other hand, can improve their economic conditions and also get money plus Lamela in return.