Mondays are normally short on transfer stories in the print media due to the match reports, but there are some who still dedicate a good old page to January window updates.

La Nazione are one such newspaper, and they actually give us something new regarding Leeds United’s alleged pursuit of Fiorentina’s Erick Pulgar.

The Chilean midfielder has been on Marcelo Bielsa’s radar for the best part of a month, but the Elland Road hierarchy have yet to fully commit on the transfer.

That, however, seems like it could change in the near future. 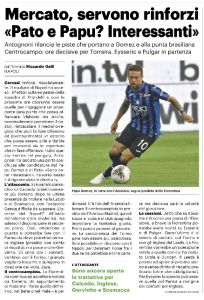 La Nazione on Monday explain Pulgar is ‘at the centre of contacts with Torino and Leeds’, with Fiorentina want ‘an operation similar to that of Pol Lirola and Alfred Duncan’.

It’s then stated Leeds ‘are ready to open with a dry loan and without a prefixed view to buy’, meaning it’s a six month loan, and that’s it.

We’ll see what comes of this, but it does appear a door is opening, even if it’s for a temporary deal.