Huddersfield Town initially signed Isaac Mbenza on loan from Montpellier in 2018 and he managed only one goal in 22 league appearances in his debut season in England.

The Terriers were relegated from the Premier League in the last campaign. Despite that, they made the 24-year-old’s transfer permanent and offered him a two-year deal.

Mbenza has made only one start in each of the Championship and EFL Cup this season and a lack of opportunities at the Kirklees Stadium saw him join Amiens SC on loan in the winter market.

The winger’s decision to join the French club didn’t pay off as he didn’t see an improvement in playing time.

Monday’s edition of Het Nieuwsblad claims the attacker is attracting attention from Anderlecht.

It’s claimed the Belgian side are in the market looking to strengthen their wide positions and have included the Huddersfield owned player in their transfer list.

Even though the player has struggled in the last two years, the Jupiler Pro League side are aware of his potential as he scored 10 goals and registered two assists for Montpellier during the 2017/18 season. 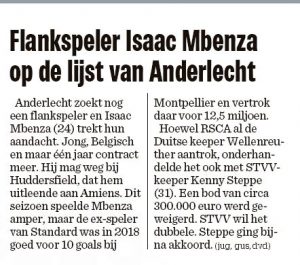 With a year left on his contract with Huddersfield, the newspaper adds Mbenza ‘can leave’ the Championship side this summer.

Parting ways would be the ideal solution for both the Frenchman and his employer.