Home Premier League Chelsea Player aware ‘this is his last chance’ at Chelsea – Blues have...
SHARE

Charly Musonda Jr. is currently training with Chelsea’s senior team, after staying on the sidelines for the last two years.

The Blues allowed him to join Vitesse Arnhem on loan in 2019 and just a few weeks into his second loan spell with the Dutch club, Musonda suffered a posterior cruciate ligament injury.

Friday’s edition of Het Nieuwsblad has a lengthy piece on the Belgian, which includes quotes from the 24-year-old and also a warning to him.

“That rarely happens in football. Normally, players tear the anterior cruciate ligament and are ready to use again six months after surgery. The doctors told me that I would have to rehabilitate for a year,” Musonda was quoted as saying by the newspaper, when detailing his recovery.

“Since I had been out for more than a year, they gave me a 20 percent chance of ever playing at the top level again. They literally said: this is going to be an impossible mountain to climb.” 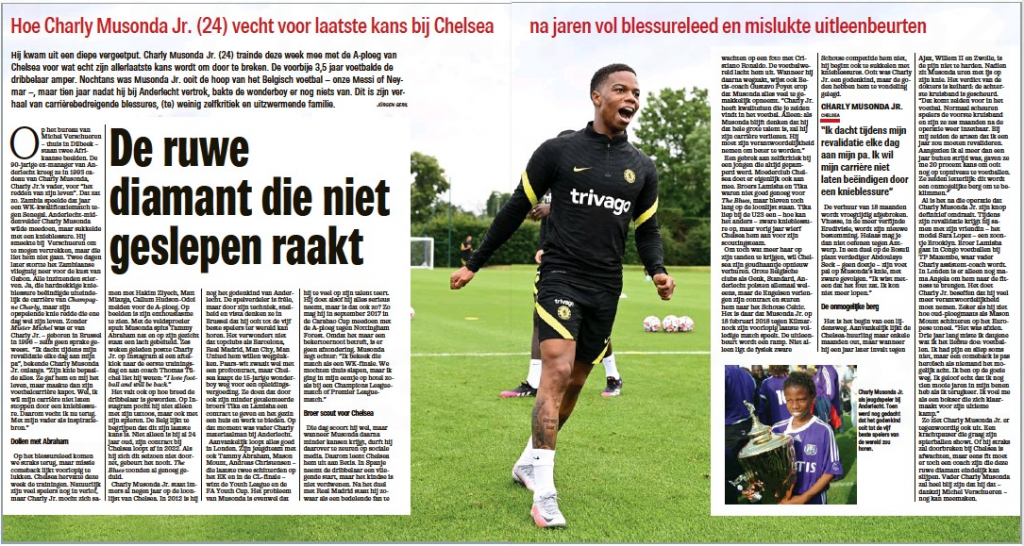 “It was a struggle. For three years I missed what I love most: playing football. I was in pain and sometimes didn’t sleep, but a comeback is only heroic when no one thinks it possible.

“I’m on the right track. I do believe I have ten more beautiful years in my legs when I return. I feel like a boxer getting ready for his ultimate fight.”

The question is whether or not the attacker will be provided an opportunity to shine at the west London club.

Het Nieuwsblad aren’t sure if the ex-Anderlecht academy star will find his way at Stamford Bridge, but they do suggest that once fit, Musonda will need a coach who can polish the ‘rough diamond’.

The player has entered his final year of contract, after being on the English club’s payroll for nine years.

It’s claimed Musonda ‘seems to understand that this is his last chance’ with the Champions League winners, who have ‘showed enough patience already’.

If Musonda doesn’t ‘make it through’ the coming season, Het Nieuwsblad state ‘it will never happen’ for him at Chelsea.

So, it’s now or never for the attacking midfielder.