Mikel Merino made just eight appearances in this calendar year for Newcastle United in all competitions, but that hasn’t stopped him from attracting serious interest from several big clubs in Spain.

The defensive midfielder has been a transfer target for Real Betis, Athletic Club Bilbao and Real Sociedad. Estadio Deportivo reported on June 13th that Merino has several offers on the table and the player now has to decide the club that is best suited for him.

Today’s edition of Spanish newspaper AS claims that all three clubs are willing to offer him a five-year deal, something which has also been stated previously. However, the player wants to put forward certain conditions that could put one club in front of the others.

Merino wants his next club to include a reasonable release clause, say around €60m. This will improve his chances of joining a bigger club, if there is any interest from any of them in the future. The 21-year-old also wants assurances of playing time from the potential suitors.

Merino has “asked” Newcastle to let him leave the club in the summer transfer window. The clubs willing to meet the above conditions will have to negotiate with the Magpies. The Tyneside club are said to be looking for €15m to allow the Spanish midfielder leave St James’ Park. 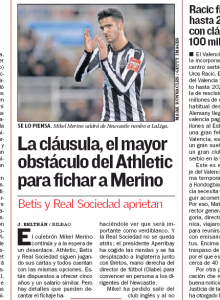 Real Sociedad president Jokin Aperribay, along with Erik Bretos, the coordinator to director of football Roberto Olabe, have traveled to England to “convince” the leaders of Newcastle to sanction Merino’s transfer.