Danilho Doekhi has ‘aroused the interest’ of Newcastle United, report De Telegraaf in their Monday edition.

The Dutch newspaper see this as good news for the player’s club Vitesse, especially given there’s wider interest in his services. From the Premier League, Fulham, who look likely to be relegated are keen, and Championship club Norwich City, who have secured promotion, are also credited with interest.

Serie A’s Atalanta and Rangers of the Scottish Premiership are also name-checked in the report.

Doekhi is a central defender and has a contract with Vitesse until 2022. They will be pressured to sell the 22-year-old unless there’s a renewal before the summer, and that’s why it’s positive for them that Newcastle and others will potentially compete for his signing. 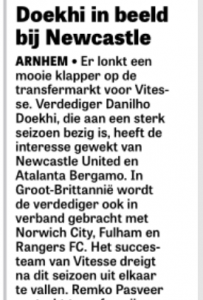 The Dutchman has played 34 matches for Vitesse so far this season, so is a regular despite his young age. Newcastle United are described as being ‘in the picture’ to secure his services in the summer window.

At this stage there’s no indication given on transfer fee.