Red Bull Salzburg star Benjamin Šeško ‘already knows the official interest’ of Manchester United, according to AS on Saturday.

The striker scored 10 goals and managed seven assists in all competitions last season and has two goals and an assist to his name form 3 games this term.

Although the top European clubs knew about the 19-year-old, his display in the friendly against Liverpool caught the ‘great attention’ of these sides.

AS state clubs from France, England, Spain and Germany picked up the phone with the sole purpose of adding Šeško to their squad. Manchester United are tagged as they and Chelsea were the first ones to accelerate to secure the frontman’s services.

The report explains there are five sides that have ‘transmitted their firm intention’ to sign the Slovenia international this summer. Erik ten Hag’s side and the Blues are ‘safe in that fight’, while Paris Saint-Germain are the last one to join the race.

Šeško is aware of the ‘solid interest’ of these clubs and evaluates his options carefully. AS state it will be a difficult choice. 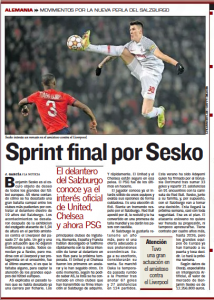 Red Bull Salzburg intend to keep their prized asset for a season, but if a ‘suitable offer’ arrives at their desk, they will consider selling him this summer.

The player, along with his club and family, will make a decision on his future next week. He doesn’t want to see his progress slow down, but at the same time, the frontman doesn’t want to rush.

With several top clubs, including Manchester United, knocking on Šeško’s door, it’s time for him to make a decision. The Slovenian will do that next week.