Home Premier League Arsenal Player ‘has already given his approval’ to Arsenal exit – ‘Fascinated’ about...
SHARE

Coming as a bit of a surprise on Thursday, the idea that AS Roma could make a move for Granit Xhaka this summer is picking up some pace around Europe.

It was Sky Italia journalist Gianluca Di Marzio who got the ball rolling on Friday, before Calciomercato picked it up soon after.

Blick then confirmed the rumours on Friday, which have also been touched on by Corriere dello Sport, who bring their own slant.

Theirs is one of optimism, with it made clear Arsenal want €25m for the player, but that’s a fee Roma aren’t prepared to meet.

José Mourinho wants to work with Xhaka, desiring a ‘player with personality and who makes himself felt in the middle of the field’.

However, ‘it’s not an easy negotiation’ despite it already being underway, but ‘there is optimism in Trigoria’. 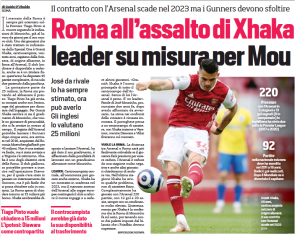 Unlike many of the other names circulating, Xhaka ‘is one of the sure objectives of AS Roma’, and while there could be an attempt to include Amadou Diawara in the deal, ‘it is easier to close with cash only’.

The Serie A side hopes to do so at a fee of around €15m + bonuses, and the Switzerland international ‘would seem willing to leave Arsenal’ as ‘he has already given his approval’, ‘fascinated by the possibility of working with a great manager like Mourinho’.