That’s what Het Laatste Nieuws are reporting and add Anderlecht have already identified his replacement.

Last summer, the South Africa international joined the Belgian side on a season-long loan deal. Prior to that, he spent the last two seasons on loan at Club Brugge and Union SG.

The Seagulls were forced to let the 26-year-old go out on temporary spells due to his failure to obtain a work permit to play in England.

With the introduction of new rules post Brexit, the attacker will be eligible to represent the Premier League side.

Brighton have a clause that will allow them recall Tau in January. Graham Potter and Anderlecht manager Vincent Kompany talked about the English club exercising the option to recall the player this month.

HLN have now backed it up saying Tau will ‘almost certainly’ return to Brighton, and this points out he should not have any issues in securing a work permit.

The Brighton man primarily operates as a winger, but Kompany has used him as a midfielder this season. 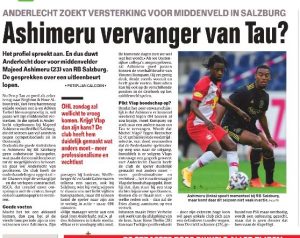 Therefore, Anderlecht are looking at the same position and have identified Red Bull Salzburg’s Majeed Ashimeru as a target to replace Tau.

The Ghanaian has now confirmed transfer talks with Kompany’s side and stressed the progress of the negotiations will be known in the coming days.