Home Championship Player aims blame to QPR and manager for being too soft on...
SHARE

The Moroccan midfielder seems to be finally living a stable period of good form in his career, five years after joining the Eagles in a move from Queens Park Rangers.

As he spoke about the ups and downs he had over the years years, Taarabt blamed the treatment he received at some clubs, and that included his time in London.

He first recalled from the time when his former Tottenham Hotspur teammate Luka Modric said he deserved to play for clubs likes Barcelona and Real Madrid.

“He wasn’t the only one. If you ask anyone who knew me when I was 19 or 20, they will all say that,” Taarabt told Record. 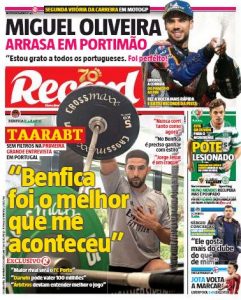 Then when asked if he feels like his career should’ve been better, Taarabt claimed that the life he had at Tottenham and QPR wasn’t the best for a young footballer.

“No doubt. Luka used to call me Zizou, because he said I was like Zidane. The pressure didn’t help me. I was in England and there it wasn’t like Benfica. They signed me and I had to be professional on my own. There was no one saying no or telling me that I had to go to the gym to do extra work. I was young, I lived alone in London, a city where many things happen.”

“I had a coach at Queens Park Rangers who sometimes said to me, ‘Don’t come and train. Show up at the game and win ’. This at 19 or 20 years old. When I signed for Benfica in 2015, I came up with that mentality. And I realised that things are different here. You have to work, be professional, something I thought I didn’t need, because I always played. It took me a year or two to get that into my head. And after two years, I almost lost my passion.”

QPR are to this day the club who Taarabt had most appearances for, as he featured for them 164 times between 2009 and 2015.

Despite being at Benfica for five years, he’s only got regular playing time more recently, and has 53 matches so far, and aims to do bigger things at the age of 31.