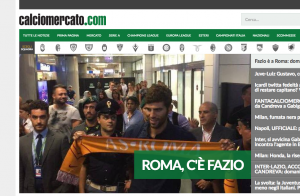 Federico Fazio is now set to be an AS Roma player, unless something fairly drastic happens over the next 24 hours.

Earlier reports in Italy on Friday claimed that former Tottenham sporting director Franco Baldini played a big part in the move, enabling Roma, who Baldini also previously worked for, to get a loan deal with a right to buy at €4m.

Italian Website Calciomercato have managed to get an image of Fazio at Rome’s Fiumicino airport. The Argentine defender is holding aloft the Roma scarf, which will have no doubt been handed to him by an eager fan.

Fazio will have his Roma medical at 10am on Wednesday morning, according to the Italian website.