That’s how Corriere dello Sport describe how Milan are going to approach their January transfer window, as the Spaniard’s contract at Chelsea is due to run out in June next year.

The Serie A side have been sowing the seeds for a few weeks now, according to the Italian newspaper, who state the first phone calls for this attempt to sign the 31-year-old date back to the beginning of the month.

Now, Leonardo and co. are ready to up the ante, with a meeting between all concerned parties said to be scheduled in the next couple of days to discuss a potential transfer.

The relationship between Milan and Chelsea is already quite good following this summer’s Tiemoué Bakayoko deal, and the Italians are hoping this will help them get the midfielder at an ‘advantageous cost’. 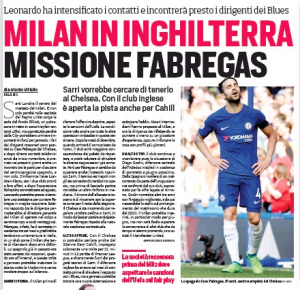 Fabregas would apparently be open to an adventure in Italy, especially in a club like Gennaro Gattuso’s, and his current manager, Maurizio Sarri, wouldn’t stand in his way.

However, before he gives the green light, the former Napoli head coach would like Chelsea to bring in a reinforcement to fill the hole, as the last thing he wants is to find himself lacking personnel in what could be a long season with the Europa League.

This is a very different article to the previous Fabregas mentions, that are normally just a throwaway line here or there, but we’ll have to wait and see what comes of this so-called meeting first.