Pep Guardiola’s interest in the Benfica left-back Alex Grimaldo isn’t something that will be forgotten by the Portuguese media.

Newspaper Record brings today a story saying the 23-year-old has joined Atletico Madrid’s wish list, with the Colchoneros making a scouting mission to watch the player.

And the only competition mentioned in the story would be Manchester City, with mixed claims which point out a possible move to the Premier League club.

Record first take claims from the Catalan press, which said Grimaldo’s recent change of agents could favour a move to England. Then the outlet says that Guardiola’s wish to sign him is ‘known’, as the player could be a replacement for Benjamin Mendy. 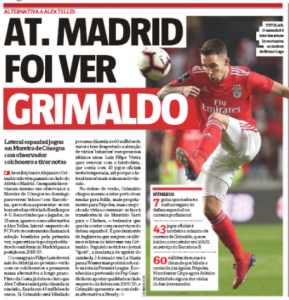 It’s worth recalling that last week, after Sport said Manchester City ‘asked about the player’s situation at Benfica’, Txiki Begiristain was spotted watching the Eagles in Portugal.

Now with Atletico Madrid joining race, maybe there will be an interesting battle for Grimaldo in the summer transfer window.