The Portuguese media haven’t been pushing this chase strongly, as they were always commenting on the news that came from the English and Italian press.

However, newspaper Record now brings an interesting short piece claiming that the Premier League side are indeed following the player due to orders from manager Pep Guardiola.

The outlet says the interest isn’t so recent. They claim Manchester City actually started watching Darwin Nunez last season, when he was having his first year in Europe, playing for Spanish side Almeria. 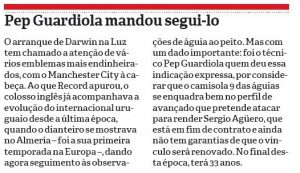 It’s Guardiola who gave this ‘express indication’, and Manchester City now continue to monitor the striker following his €24m move to Benfica this summer.

In 11 matches for the Eagles so far, the Uruguay international has five goals and six assists.

It’s claimed that the manager considers Darwin to have the right ‘striker profile’ that he wants to replace Sergio Aguero, who may not stay at the club after the end of the season.