Before kicking off the season with Rangers, Pedro Caixinha has spoken once again to the Portuguese press, and was once again asked about Celtic, this time in a big interview with newspaper Record.

The chat was a summary of Rangers activity in the transfer market, with Caixinha asked to comment on what he needs to do to get closer to Brendan Rodgers at Celtic, and make a fight of the Scottish Premiership.

Rangers have already confirmed eight additions to the squad this summer, with four of them being Portuguese. That’s why Record asked how the recruitment of those players was done, in the wider contact of competing against Celtic..

“Having a clear profile of the club matrix we look for players under a hierarchy. I learned this at Santos Laguna, where there was a scouting department with an incredible database. I wanted a player and there was a list of ten.

“We would serialise and move on to the interview stage. At Rangers, due to lack of time, I left the interview aside, I already knew the players. The signings were almost all first options and the board did a fantastic job.”

Regarding Carlos Peña and Eduardo Herrera, both coming from Mexico, and Colombian Alfredo Morelos, Caixinha was asked if they’ll have much trouble adapting to life in Scotland.

“It won’t be easy. It’s not just about the weather, it’s about culture, habits and even food. Mexican football has evolved, players already want Europe. If they have ambition they must go through sacrifices. But we will help them, of course.” 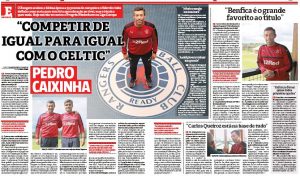 The manager spoke about his goals, with the most covered in Portugal being to compete with Rodgers and eventually match Celtic. Caixinha makes it clear this is not the only objective, as the Europa League is another factor to be focused on this season.

“Our obligation can not be simply to think of an approximation. We want to compete with Celtic equally. We are well aware that we will be involved on four fronts: six years later, we are back to European nights and we want to reach the group stage of the Europa League but, moreover, we will compete for the domestic titles. The size of the club takes us only think about winning. We have to take this responsibility for the history this club has.”