As Sporting are still to announce the signing of Ruben Vinagre from Wolverhampton Wanderers, the Portuguese media continues to bring the latest updates on this process.

Newspaper A Bola today features a story saying the Lions had been sorting on Wednesday the final details for the transfer, such as his salary and his contract’s length.

All those issues are expected to be overcome today and ‘in an optimistic scenario’ he could get to know the club’s facilities and have his medicals on the same day.

That’s an information shared by O Jogo as well. They claim that his medicals are taking place today and the announcement should be made on Friday. 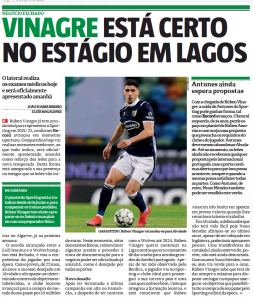 O Jogo points out that the clubs have already reached an agreement for the transfer, as Vinagre will be loaned to Sporting for one season.

In case he reaches some performance goals, then the Lions will buy him for a fee of €10m, with Wolves keeping 50% of a future sale.

It’s claimed that ‘all parties’ want the deal to be made official tomorrow, and the full-back will certainly be with the Lisbon side during their pre-season.