His contract with the Ligue 1 winners runs down in 2020 and even though his idea is to continue at PSG, other clubs, ‘particularly Arsenal’, are ‘lurking’ around the right-back.

Unai Emery trained the 27-year-old when the current Gunners manager was in charge at Parc des Princes.

It is claimed the former Sevilla coach wants to bring the Belgium international to the Emirates as a replacement for Hector Bellerin, who is now on the sidelines recovering from a long-term injury.

Manchester United also get a mention, but HLN claim the defender will not be the first choice option at Old Trafford, so Arsenal could have that advantage.

Meunier is on the radar of the north London side, the Red Devils and an unnamed club.

Regarding his future, Meunier said: “I also read a lot about it in the newspapers. The press knows more than I do. There are great clubs, which is very interesting. 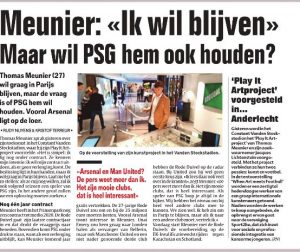 “As a player of PSG, you are always in the spotlight. We have the level to join many other clubs. We’ll see.

“I am looking forward to staying in Paris, but if I have to go to another club, I will leave.”

Meunier was speaking at the launch of an art exhibition he’s put together.