One of the key members of France’s 2018 World Cup win, Paul Pogba remains an important member of the national team.

However, his role has somewhat changed, with Didier Deschamps allowing him far more freedom to do what he wants of late, which has both worked and hindered the team.

That’s how L’Equipe see it following the 1-1 draw against Ukraine in the World Cup qualifiers, as the Manchester United star trying to pull the strings in the first half, but saw a far more muted back end of the game.

His initial deep playmaker role saw him try to create a lot out of nothing, with few making themselves available for him, and the French newspaper explain it was ‘quickly felt that, faced with a lack of movement around him, he, the author of a luminous pass for Martial, was overcome with frustration’.

That translated into his interview with M6 on Sunday, where he asked his teammates to be ‘more aggressive’ and to ‘have pride’ and ‘find the desire again’, but they quickly point out ‘the tendency to overplay is never too far’ when it comes to the Manchester United man. 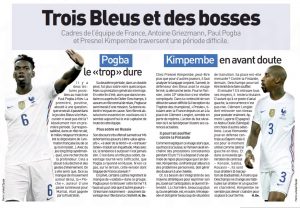 That’s when his more ‘sober’ role during the World Cup is recalled, where his game was aimed ‘more towards efficiency’ than creativity, and ask if that ‘isn’t this version that the France national team’ need?

For that to work, however, more players need to help him out in the creative aspect, which he tends to have at Manchester United, with the likes of Bruno Fernandes always willing to help out.

Despite all this, there’s time to turn things around for the still undefeated France, but they need to ensure more wins and fewer draws if they want to avoid finding themselves in an unwanted tussle with the likes of Finland for the top spot in Group D going forward.