Tottenham Hotspur’s interest in Bryan Gil first emerged on Tuesday and since then there have been regular reports on the north London club’s effort to sign the Sevilla player.

On July 21st, we covered claims made in Spain that the negotiations between the two sides are ‘quite advanced’.

It was also stated that Nuno Espírito Santo’s side will pay €25m plus offer Érik Lamela to the Spanish club.

Mundo Deportivo now claim the Argentine has agreed a three-year contract with Sevilla and has also made an effort to lower his salary to join them.  Gil, on he other hand, is currently with the Spain squad, preparing for the Tokyo Olympic Games.

Regarding Gil, the newspaper explains the operation to take the 20-year-old to Tottenham is ‘underway’ and the deal ‘may be closed in the coming days’. 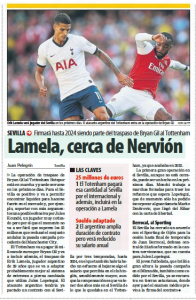 The winger’s sale to Spurs will see Julen Lopetegui’s side ease their financial situation.

In addition to this, the money raised from Gil’s move to Tottenham will also help Sevilla make new additions in the transfer window.

This will be Sevilla’s ‘first big operation’ of this window and even though it’s not yet completed, Mundo firmly believe the deal will go through.