Chelsea and Barcelona ‘advance’ on a deal for Philippe Coutinho, claim Sport on Wednesday.

After Bayern Munich decided not to make the Brazilian’s loan move permanent, Quique Setién’s side will make him available in the market. His departure in the upcoming transfer window is seen as an ‘absolute priority’ for Barca.

It’s claimed there are ‘open negotiations’ between Barcelona and Chelsea, and there’s ‘optimism’ that a deal can be agreed for the 27-year-old’s move to Stamford Bridge.

Kia Joorabchian, one of Coutinho’s agents, has a lot of influence in England and he has been key to starting negotiations with the west London club.

Barcelona have slapped a €90m valuation on Coutinho (the figure needed to avoid making losses if they sell in the summer), but Frank Lampard’s side are far away from reaching it. The Coronavirus crisis has even lowered his valuation.

Chelsea are ready to take Coutinho on loan and also take care of his wages during his temporary stay at Stamford Bridge, an operation similar to the one agreed with Bayern.

Barcelona want to include a mandatory purchase option of just over €65m, but Chelsea want to have an option to make the deal permanent, rather than an obligation.

Although there’s optimism a deal between Barcelona and Chelsea could be agreed, there is no agreement between the two clubs as to what needs to be done in June 2021. 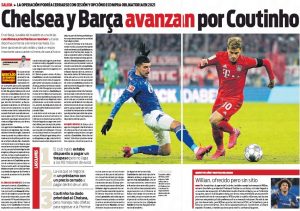 Barcelona continue to push for mandatory purchase option, while the Premier League side want to avoid it.

This could drag on for the next few months.