Home Championship “One hand doesn’t know what the other is doing” – Leeds United...
SHARE

Now the transfer window has closed, it’s time for the real mud slinging over failed moves to begin. Even moves that went through can bring scorn and snipes sent country to country.

It’ll be no surprise if it’s found out that Hamburg and Leeds United didn’t quite get on over the Pierre-Michel Lasogga transfer.

Hamburg announced the deal early and Leeds forced the German club to backtrack, and then there were claims the whole thing was held up by a paperwork problem. The German media initially blamed Hamburg, before it appeared they were encouraged to completely change that stance and blame Leeds United instead.

Nothing has filtered out yet, but over the weekend Hamburger Abendblatt had a look at HSV’s transfers, and Lasogga was obviously a major part of that.

Whilst the mini Leeds United saga was ongoing, Klaus-Michael Kühne branded the departing Lasogga the flop of the century. The Hamburg investor had been angered by what he saw as a repeat waste of money at the Bundesliga club.

Kühne’s Lasogga comments made those in charge of transfers at Hamburg less likely to ask him for financial help towards the end of the window.

HSV had been keen to sign Augsburg’s Konstantinos Stafylidis but simply didn’t have the money, so shouldn’t have started the transfer effort in the first place. Augsburg’s general manager Stefan Reuter is quoted by Hamburger Abendblatt as saying: “Sometimes I get the impression that one hand does’t know what the other is doing… That gave me an 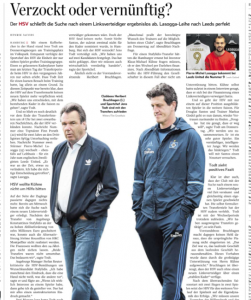 The mess at Hamburg would make it likelier any Lasogga issues were their fault, rather than down to Leeds United, and it also provides food for thought ahead of next summer.

Should Lasogga impress then the time will come that Leeds consider making the move permanent, and that’s likely to lead to interesting negotiations with HSV. The German club are likely to continue to stumble from drama to drama, and it could all be a question of Victor Orta and co picking the right time.