Home Premier League Arsenal ‘One of the best in the world’ – Player quizzed on Arsenal’s...
SHARE

Back in the last summer, there were strong rumours both from the English and the Portuguese press saying Arsenal would be tracking Benfica youngster Diogo Gonçalves.

The 20-year-old, who’s currently with Benfica B, has been impressing in several youth levels and that’s why Arsene Wenger would have sent scouts to watch him closely.

But as reported by O Jogo at the time, Gonçalves wasn’t keen on joining the Gunners and has chosen to stay at the Eagles instead. The newspaper actually used the word ‘reject’ to show how he turned down the chance to move to the London side. 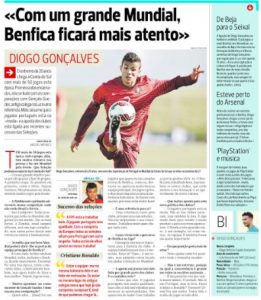 One season later, Gonçalves still hasn’t made his first team debut, but keeps receiving big attention from the local media.

A Bola managed to speak to the player this week, and with the Arsenal interest remembered, the midfielder made it clear that it’s still not his intention to make such a transfer.

“The English league is very competitive, one of the best in the world, but I don’t think of it for now. The near future only goes through the national team.”

The player has ten goals and ten assists in 40 games this season. His contract runs until 2021, and needless to say, he’s a Jorge Mendes client.