Fabio Paratici will join Tottenham at some point in the near future, with contacts between him and the club ‘at an advanced stage’.

That’s according to Corriere Dello Sport, who say he could reunite with Antonio Conte at the club, but that is ‘a bit more distant’ at this moment in time.

Paratici has recently left Juventus after eleven years, and 19 titles won, but is keen to return to football as soon as possible, and his new club ‘will be Tottenham’.

Talks between the two parties are at an ‘advanced stage’, and he is ‘one step’ away from completing his move.

He could reunite with Conte at the club, but ‘a little more patience’ is needed on that front as the Italian wants to reflect.

He is ‘tempted’ by a return to the Premier League but is looking for ‘guarantees’ from Tottenham on ‘the technical aspect’. 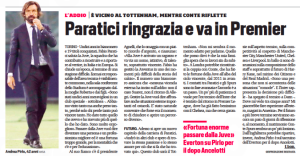 Conte wants assurances he will be allowed to battle with the likes of Manchester City, Manchester United, Chelsea and Liverpool, and currently, discussions are centered around what his staff will be and the future of Harry Kane.

He needs ‘a couple of days of reflection’, and at the moment, a marriage between him and Tottenham is ‘a bit more distant’ than that with Paratici, who is on the verge of finalising his move.