Home Europe ‘An offer that satisfies both parties’ is enough for Liverpool to seal...
SHARE

A few days ago, as Liverpool were linked with Barcelona’s Rafinha, we covered an explanation from Spain that a transfer is certainly a possibility.

Mundo Deportivo reiterated claims of Liverpool interest in the Brazilian, and explained the player is thinking about a move in the summer window.

Rafinha’s reason for considering a change of scene is said to be prompted by the 2018 World Cup in Russia, playing a bit-part at Barcelona may not be enough to push him into contention for the tournament.

Marca have followed up with similar claims today, a further boost for Jurgen Klopp if Liverpool interest is as reported. The Spanish newspaper say ‘an offer that satisfies both parties’ would be enough to take Rafinha from Barcelona. 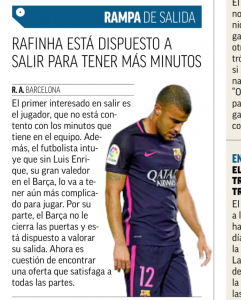 Whilst that sounds like stating the obvious, the point Marca are making is that everyone is open to a potential deal, there’s no intention to fight it and make things more difficult than they need to be.

So how much would that be? Rafinha has a contract with Barcelona until 2020, Liverpool would likely have to pay something around €25-30m for the player.