Home Europe ‘The offer does not materialise’ – Everton stalling on going through with...
SHARE

Over the past few months there’s been repeat claims from the Catalan media about Everton interest in Barcelona goalkeeper Neto.

The 31-year-old wants to leave the Camp Nou and it’s the Toffees who have been pushed forward more than anyone else for his signing. Those claims returned in the past week, with Everton pushed forward once again to sign the Brazilian.

Saturday’s edition of Mundo Deportivo looks at Everton interest, and they say Neto is one of the players Barca will allow to leave this summer. That’s not because they want to get rid of him, he’s seen as a very good deputy for Marc-Andre ter Stegen, but due to his request for a change of scenery.

Neto’s situation has become complicated, due to the fact that no firm proposals have arrived so far. Everton interest is again pushed forward, and it’s then stated: ‘The offer does not materialise’ 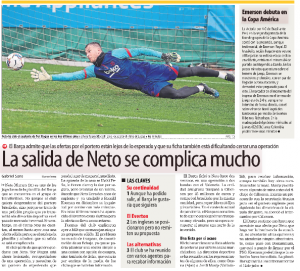 The Premier League club would be stalling on their interest, and that could be because they’ve walked away entirely.

Neto would almost be certainly be looking to be first choice, or have a genuine battle to be so, and Jordan Pickford doesn’t look under as much threat right now as he has at certain times during his Everton career.

The Brazilian will likely need to find a different destination.