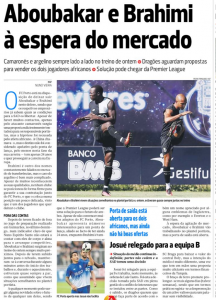 Porto are looking to offload two of their attackers this summer. Vincent Aboubakar and Yacine Brahimi are both being left out of the pre-season games and should be leaving the club soon.

And as always, A Bola picks the Premier League as a solution for these issues.

There’s no particular reason why the English clubs would be wanting Aboubakar, as no sides are said to be interested in the 24-year-old. But Porto would still hoping that a call from the UK would help them to get rid of the player.

In Brahimi’s case, there’s more sense, at least according to the newspaper’s information. A Bola claims that Everton and West Ham both like the player, as he waits for an offer to leave.

Brahimi was heavily linked to Chelsea earlier this year, with reports from Portugal saying the Blues had the transfer done. However, it never happened and the story was obviously never mentioned again.

Liverpool were linked too, and at the time, the papers said Porto wanted at least €30m for Brahimi.

The Algerian finished the last season with nine goals and ten assists. A Bola claim that it’s the player who wants to leave, and although many clubs know his qualities, no sides have shown they are ready to pay the winger’s price.