Catalan newspaper Diari de Girona today features a nice piece on Huddersfield Town’s chances of being promoted to the Premier League. To talk about that, they interviewed the Terriers’ assistant manager Narcis Pelach, who’s clearly excited about the season they’re having.

The outlet asked the official about the assessment he makes of this year at the club, and the coach was clear about how satisfied the coaching team are with the squad’s performance.

“It’s a 10. Against all odds, Huddersfield have fought with the big ones. It’s the strength of the group, the illusion of a dream,” Pelach told Diari de Girona.

“People have come together with a lot of desire to get their heads working humbly. That everyone has the same profile has made us go so far. We would like to end it in the best way, although we have to be realistic because reaching the final is already a success. We will try to achieve the desired promotion without pressure.”

Regarding that usual question of foreign outlets wanting to know the difference that English football has to others, Pelach pointed out how packed the stadiums are in the Championship, with all clubs having a decent number of fans.

“It’s very passionate. The main difference I’ve noticed is that people here are on your team. In Spain it’s brought together by the biggest clubs such as Barça, Madrid, Atlético, Sevilla… Not here. Everyone belongs to their club.

“It’s spectacular because no matter where you go, there are 20,000 or 30,000 people. In the Championship, the stadiums are full, with almost always 90% capacity, and the televisions have less effect. Matches are played without moving to accommodate the broadcast. It’s nice to see and live.” 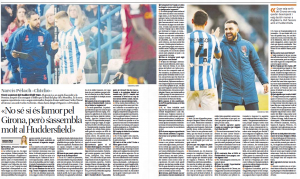 Huddersfield Town play Nottingham Forest on Sunday in a game that could take them back to the Premier League. When asked if his stay at the club would depend on the Terriers’ promotion to the top flight, Pelach had a very clear answer about it.

“No. Whether we go up or not, everything stays the same.”

And the one thing he doesn’t like in England? You guessed it, the weather.

Club could return for Tottenham man after ‘brilliant’ second half of...