Marca get to the point with their Thursday headline on Valencia interest in Javier Hernandez.

The Spanish newspaper shout ‘Obsession with Chicharito’, and say Los Che will ‘insist’ on signing the West Ham player until the end of the transfer window.

Valencia plan to focus all their efforts on the move because they feel the Mexican is the player who ‘most fits’ where they’re trying to go with the team.

They need a number 9, someone who has a knack of scoring goals, whether that be off their foot or backside. Marca say the club are going to throw everything at getting the signing, and further state ‘it’s become an obsession’.

From West Ham’s perspective, it’s stated the Premier League are waiting until the end of the market, because they’re working themselves to bring someone in. Without that, they don’t imagine letting a forward go. 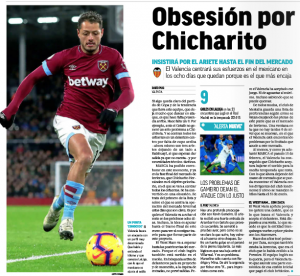 It’s once again claimed that terms have already been agreed between Valencia and Hernandez, with the footballer agreeing to lower his salary if he’s to make the move.

Whilst in Spain they want a loan, and it’s claimed the striker is keen on that too, West Ham would prefer a permanent transfer… so even if a replacement arrives this one isn’t going to be straightforward.