Having sold Jordan Pickford to Everton for a casual £30m, Sunderland are in need of a first-team goalkeeper, and the options out there aren’t the cheapest.

That’s why the Black Cats seem to be looking around the free agent market for the 23-year-old’s replacement, and Cédric Carrasso appears to be on their list.

The 35-year-old was recently released by Bordeaux after eight years with the Ligue 1 side, and is attracting a lot of interest from the Championship, with Nottingham Forest and Bolton also after his services. 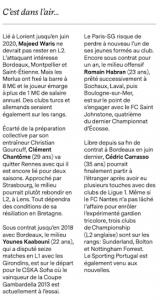 France Football are the ones providing the update on the situation this week, and while the goalkeeping problem at Sunderland is clear for all to see, Nottingham Forest’s, for example, isn’t.

Despite having four goalkeepers on the books, only Jordan Smith seems to have any kind of future at the club, as doubts remain over Stephen Henderson’s, Vladimir Stojkovic’s and Dimitar Evtimov’s ability to help the club improve on last season’s rather catastrophic season.

Bringing in someone of Cédric Carrasso’s experience, a goalkeeper who has spent all of his career in Ligue 1 at clubs like Marseille, Toulouse and Bordeaux, could be crucial for a club looking to bounce back up the table in the upcoming campaign.

As for Bolton, it remains to be seen if they’ll be able to establish themselves in England’s second-tier once again, and the goalkeeper’s decision could rest on who has the more attractive project.

On paper, that’s probably Sunderland, having just gone down and looking to get promoted straight away, and with just one goalkeeper at the club for now, there’s less competition there.