Turkish newspaper Fotomac report Nottingham Forest and Watford have made enquiries with regards to signing Galatasaray striker Mbaye Diagne, and the Turkish side are looking to get in the region of £5m from the sale of the player.

It’s reported both English clubs are interested in signing the Senegalese striker this summer, who was loaned out to Club Brugge at the start of the season. Galatasaray are looking to get rid of Diagne, a player they signed for €13m back in January 2019.

Fotomac add Nottingham Forest are ‘especially’ interested in signing the 28 year old, with claims their manager Sabri Lamouchi is a big fan of the player, and wants to see him in his squad next season. 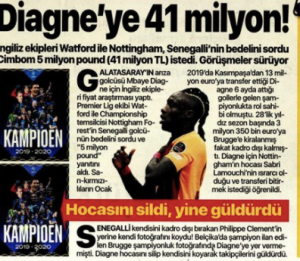