Home Europe ‘Not unreasonable’ for Mendes to help Wolves with transfer operation ‘at zero...
SHARE

“Barcelona has been my home and it is my home. I have grown up there, I was there at the club for eight years We would have to see what they offer,” he told Sport.

The possibility of the La Liga side trying to take the winger this summer is discussed in the Catalan media.

Sport suggests a ‘barter’ involving the 25-year-old and Francisco Trincão could be an option for the Blaugrana.

The newspaper states the Spain international ‘doesn’t hide his desire’ to sign for Ronald Koeman’s side and they are basing this on the latest comments made by Traoré .

Meanwhile, Trincão was restricted to only nine starts across all competitions last season and he’s on the exit ramp because of Barca’s ‘imperative need to make cash’ to fulfil Koeman’s needs. 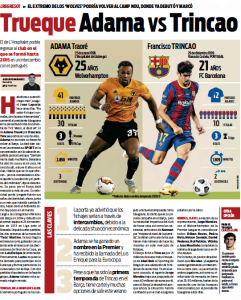 The Portuguese attacker is managed by Jorge Mendes and the latter has close ties with Wolves and also shares a good relationship with Joan Laporta.

Therefore, ‘it doesn’t seem unreasonable’ for the super-agent and the Barca president to manage an exchange deal ‘at zero cost’ involving the two players. The duo’s current market value is between €25-30m.

Sport add ‘Mendes is key’ if Wolves and Barcelona are to carry out a swap deal involving Traoré and Trincão.